All the latest from Aqua Cure 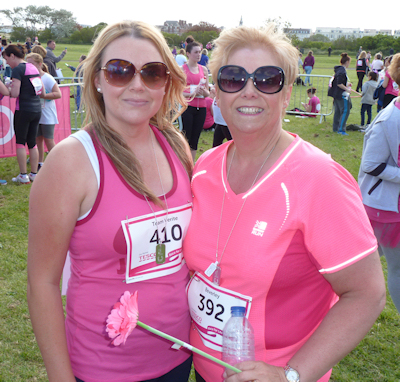 Bev completed the 5 kilometre distance in 48 minutes and raised £224 and Kayleigh in 56 minutes, raising £176. Aqua Cure are proud to have contributed, sponsoring Bev and Kayleigh £50 each.

Bev was inspired to participate in honour of her friend Linda who was diagnosed with cervical cancer last year. “When it touches your best friend, it affects everything” Bev told me. Happily Linda was able to compete in the event and ran alongside Bev.

Kayleigh completed the event in memory of her granddad who lost his battle with cancer in March.

Bev described the event as “a fantastic day, the atmosphere was brilliant”. With encouragement from the crowd, participants “sprinted to the line and were greeted with glass of prosecco”.

And a very well earned one as well by the sounds of it. “I haven’t sprinted in years” laughs Bev, “I didn’t know whether my legs would do it – but they did!”

Bev and Kayleigh are both planning to take part next year with Bev hoping not only to “run faster and get a better time” but also to “get more Aqua Cure staff involved”.

Well done to both Bev and Kayleigh and we all look forward to supporting / sponsoring you next year.